2018 was named the year of the woman; yet across the globe, women continue to face discrimination, unequal pay, and reduced opportunities. This is true within many disciplines in science—where women make up less than 30% of researchers, are paid on average less than men, receive fewer grants and awards, are reviewed more harshly (yes, even in ecology), experience gender biases that vary by race, and, as we’ve written before, grapple with alarming rates of sexual harassment. The system is unfair and academia is broken.

These injustices may seem insurmountable when listed together (and honestly some days the situation can feel hopeless). But over the last two years, our organization, 500 Women Scientists, has found that when taken together, small steps can create a big impact.

500 Women Scientists was founded in 2016 by Drs Kelly Ramirez and Jane Zelikova. Our mission has been to make science more open, inclusive, and accessible and to change the landscape for women in science. With our volunteer leadership team, 500 Women Scientists challenges the status quo of what a scientist looks like, speaks up for women in science (most recently writing a letter on behalf of BethAnn McLaughlin, creator of #MeTooSTEM), and continues to build a global network of women in science (currently with over 20,000 scientists and supporters). 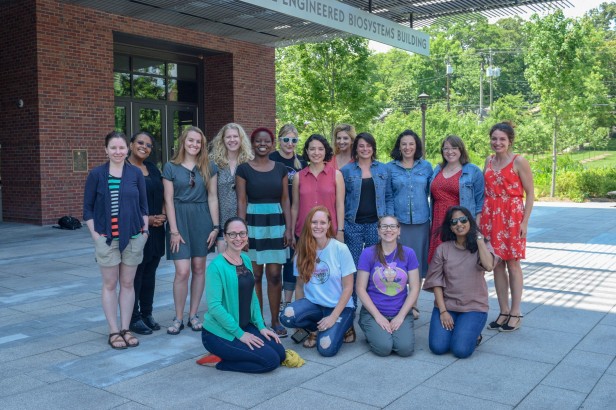 The questions that guide our efforts

Similar to how many scientists design their research, our solutions to these injustices start with asking questions. At 500 Women Scientists, here are two questions we use to guide our work and how we’ve tried to answer them:

“Whose presence tends to be missing from the center of science—in its goals, tools, leadership, teaching, and applications—and how do we bring these communities in?”

For too long, women’s contributions have been brushed to the edges of our science—from our textbooks to invited speaker lists and panels. To bring credit to women in science, we created new platforms for women to amplify, highlight, and share their work in their local communities. This begins with our network of local chapters (pods), where women are addressing their community’s specific interests and concerns. These leaders have engaged in activities that run the gamut from science outreach events and writing OpEds, to organizing fundraisers to support organizations with shared missions.

We also developed Request a Woman Scientist: A resource for journalists, educators, policy makers, scientists, and anyone needing scientific expertise. For far too long, we’ve heard people ask, “How do we even find women scientists—there don’t seem to be enough of them?” Our Request a Women Scientist database helps answer this question so we can begin to put an end to this overused excuse. Who we encounter influences who we think of as scientists and where we think they come from, so it’s critical that we see and hear women in our media and at our academic events.

This same principle applies to the question, “Who can I Wiki?” Wikipedia has become one of the primary sources of information online, but pages dedicated to the profile of women scientists are disproportionately outnumbered by those of men. Inspired by the leadership of Dr. Jess Wade of Imperial College, our members learn and train others to create and edit encyclopedia pages for women in science (wikiathons). These individual acts go a long way to increase the representation of women in STEM and help combat bias on the Internet (here are the stats from our Ada Lovelace Day wikiathon).

To successfully increase representation of women in science, we must also be willing to listen to women’s stories. In our most recent project, #SciMomJourney, we are bringing more visibility to the challenges mothers in science face when starting or building their families. As part of this campaign, we are crowdsourcing experiences to shine a light on the challenges many moms face in scientific institutions and creating a repository of resources for sci-parents.

“How can we better center women who are not white, able-bodied, cis, straight, or otherwise typically considered ‘the norm’?”

It’s not uncommon for conversations about diversity in science to focus only on gender. But women span a spectrum of intersectional identities—which means women also face a spectrum of different biases and challenges in science. To truly make science inclusive, it’s critical we explicitly call attention to other axes of identity—including race, disability, and sexual orientation. Otherwise, our efforts to address inequity in science risk being centered on only a portion of the women who are a part of our scientific community. 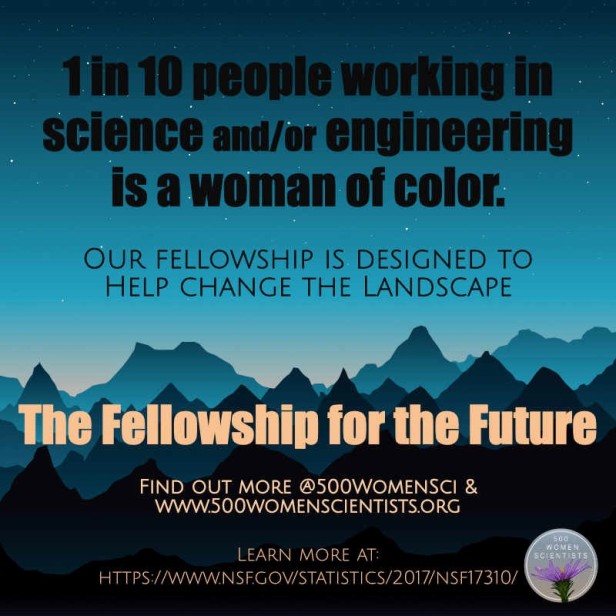 Recognizing that women of color are currently underrepresented in STEM leadership, and often take on efforts to support students, peers, and structural changes at their institutions without proper acknowledgement or resources, 500 Women Scientists has launched the Fellowship for the Future. Our fellowship aims to change the scientific landscape by building a new network of leaders and projects that help break down barriers, connect women of color together in leadership, and reward these leaders for their efforts that support the future of our science.

The transgender and gender-nonconforming communities also continue to face hate and discrimination both in and outside of academia. We recognize that some of our students, our colleagues, and our mentors are part of these communities. And in solidarity, we partner with 500 Queer Scientists in the important work they do to call attention to policies trying to erase their identities.

How can you join the conversation and make a difference?

The word “activism” sometimes conjures up images of big, bold, and time-intensive efforts.

Activism can take on these characteristics, and sometimes needs to, in order to make important points and push for substantial change. But if you’re not ready for that, there are ways to work locally that still have an impact! These acts can be as simple as preparing for thoughtful and honest conversations about diversity and privilege with your peers and colleagues, volunteering for a cause, or posting a safe-space sign in your office and advocating for these spaces when their importance is questioned.

Starting small is great, but don’t stop there. Look towards others for ideas and how they have turned individual efforts into larger projects. We’ve recently been inspired by Teal Harrison, a graduate student who created a diversity, equity, and inclusion library for her academic department; Professor Nathan Alexander, who held his student’s daughter during his class so the student could take better notes; Teresa Baker, who writes about the history of exclusion in national parks and leads programs to “diversify the trails,” as Teresa describes it; and the University of California, who took an institutional step in supporting open-access science.

Need more ideas and continued inspiration? We post tractable ideas every week in our #TakeActionTuesday posts.

Feminism isn’t only for women—it’s for everyone.

There are a lot of discussions and misconceptions about what feminism is and isn’t. For us, feminism is a lens we can use to identify whether there is equity among genders (and other groups that may be marginalized) within our scientific communities. What does this look like in action? Using feminist lenses helps identify inequities (like how faculty may be less likely to hire or mentor women) and ways to create actionable change (like how men can support women facing discrimination in the workplace). Equally important, feminist lenses help us recognize the ways that traditionally masculinist ideas and characteristics are used to judge who is capable, competent, and credible enough to be a scientist—and how gender bias infiltrates into the science and knowledges that we produce.

Want to help remedy the inequity in science and be an active ally? Get informed: Read existing work on how structural biases affect women in science. Listen to women’s stories about gender bias. Don’t be silent in the face of discrimination and misconduct. Stay critical, and ask questions: Who’s missing? What are the silent assumptions about who a successful scientist is that might be excluding certain groups from participating in your department, discipline, or institution? And importantly, what can you do about it?

One thought on “Move science forward: Join the conversation on diversity and inclusion”

My Tweets
Join 151 other followers